Odds of Winning at Keno 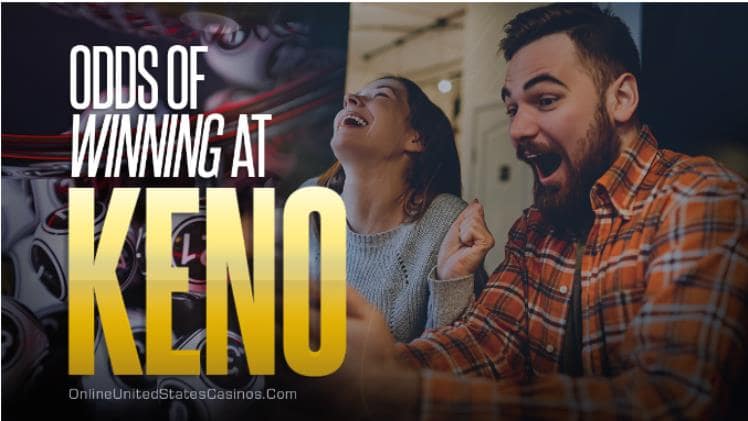 Yes, keno is a casino game. Why? It is a player versus operator gambling option whose round outcomes get decided entirely by chance. It was invented around two thousand years ago in China, qualifying as the oldest known lottery. Keno made its way into Nevada’s casinos in the 1930s and is now a mainstay in Sin City establishments. Multiple state-wide draws also get organized in many US territories by lottery commissions, and the same occurs in countries like Australia and Canada. So, to say that keno is a popular gambling pick would be an understatement. It is many older casual players’ favorite game, and it is one that many experienced ones like to dabble with on occasions.

However, even though keno is a gaming mainstay, it boasts a reputation as a game where the winning probability is super high. Such word of mouth has led to this option becoming a fun-play pick only for those dreaming big of a massive win unlikely to come. Below, we examine the odds of winning at keno while providing a few approaches on how to play this lottery-style gambling choice more wisely.

It is vital to elaborate that standard 80-ball keno involves selecting up to twenty numbered balls per round. Nonetheless, many games payout wins for hits from seventeen to nineteen, the same as they would for correctly guessing all twenty numbers drawn. The chances of the latter happening are one in 3,5 quintillion.

Gambling sites list keno’s house edge anywhere between 20% to 40%. Yet, this is for the game merely paying any prize, and most options from this lottery genre at land-based locales do so for even four accurate guesses from a possible ten. Hence, the probability of that happening is 20.5%.

Naturally, the winning odds in play dramatically change based on the number of selection spots and the specific rules of each game. State/nationwide draws offering up to twenty picks often provide prizes from hits above seven, while casino keno games adjust their payouts depending on the hit ratio.

How to Play Keno

Undoubtedly, keno is one of the simplest games of luck ever. Like in most lotteries, gamblers select a specific amount of numbers that they hope will match those produced in a random draw. The most rudimentary form of this game bears the nickname Spot keno, and it features no bonus balls or multipliers.

Of course, different variations exist, products offering progressive prizes and others utilizing forty balls or less. Online, slot-like choices are a thing, and they are more likely to produce rewards. Though, these are more modest ones.

Keno options churn out prizes utilizing a pay table that defines what reward will be given for what hit ratio. So, players must know the rules of their chosen game.

What Numbers Hit Most at Keno?

Since a lotto hopper or an air-powered machine draws the keno balls in play, there is no pattern that their selection follows. It is all up to Lady Luck, as chance has the final say in every round. Thus, it is irresponsible to say that one set of numbers is more likely to hit than others. Still, according to some research, the ones that show up the most in 80-ball keno are 74, 67, 66, 58, 44, 16, 14, 10, and 3.

All readers must understand that the validity of labeling the above-listed figures as the ones most likely to get drawn by a machine or a software algorithm is a bit dubious. Because known aggregations only factor in a limited amount of data and are not reflective of the number of draws happening around the globe every day.

Even if the ones rattled off statistically have appeared on keno boards most often, past results do not dictate future ones. Therefore, they are not an indicator of what numbers are most likely to get drawn in upcoming rounds.

How to Increase Your Chances at Keno

The best advice anyone can give gamblers concerning how to win at keno is to play online at reputable sites approved by premium review hubs. Then only select games that feature a decent return-to-player percentage (above 90%), and look for titles with a bonus round. Regarding the last tip, many internet keno products feature bonus modes akin to those in slots. These can open a path to attaining mega prizes or provide a road to snagging consolation or extra rewards.

While many sites suggest utilizing the Round Robin strategy, where gamblers select sets of numbers (a mixture of high and low ones) and play two to three per card, there is no science backing this approach, so best avoid it.

This article was written in collaboration with gambling experts.